Our mission is to address issues of equity in citizenship, from access to voting to the ways in which all citizens interact with local, state, and federal governments.  NSJA is a 501(c)(3) non-profit organization. TAX ID 85-1740062
DONATE
DONATE 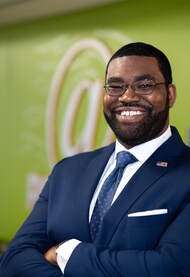 ​Growing up in Cincinnati, Ohio, Christian's encounters with the justice system began at the age of five when he watched his mother's arrest, an occurrence that happened several more times before she lost custody of Christian at age 16. He once witnessed his grandmother being strip-searched, handcuffed, and driven away from a shopping center in a police car. He was seven years old. Before finishing high school, he saw several family members and friends destroyed by murder, violence, drugs, and other crimes, including an uncle who was sentenced to life in prison for murder.

At 17, Christian was kicked out of school. Headed down a path leading straight to a jail cell, he encountered Officer William Dean, a police officer who took an interest in helping him to break free of the low expectations inherent in his situation. Because of Officer Dean's mentoring and support, Christian learned that he was capable of changing his path. Determined to break the negative cycles of his upbringing, Christian defied all odds, completing his education and becoming an attorney in 2012. The horrors experienced during his childhood ultimately led him to devote his career to making our country safer by working with our youth to reduce crime.

Christian Wise Smith is living proof that an individual can change his or her path and create a positive future for themselves and their families, and that law enforcement professionals can have a positive, long-term impact on the communities they serve. Now, he wants to prove that we can change the American justice system to ensure that everyone, no matter race, nationality, religion, gender, socioeconomic status, sexual orientation, citizenship or past criminal history, will experience equity, safety, dignity, respect, and fairness at the hands of police, local prosecutors, and judges.

​Christian believes in the foundational principle that all people are created equal.  "It’s time for us to finally treat each other that way."